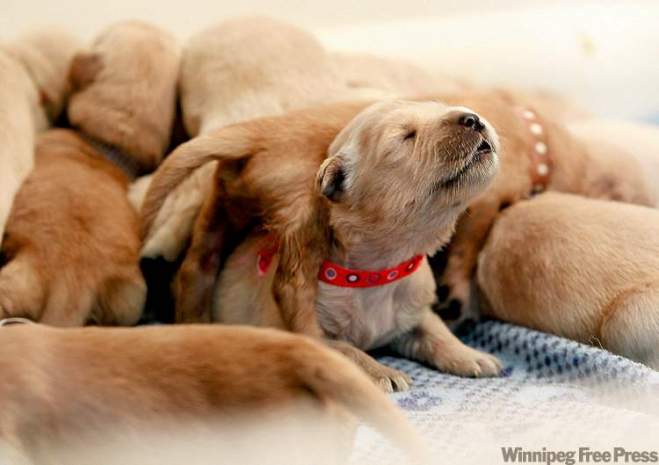 Ruth Bonneville, Winnipeg Free Press, Sept 09, 2010 Local - Eight day old golden retriever pups snuggle together Thursday afternoon after feeding from their mom, Giselle who may have broken a world record by having the most pups in one litter. Photo by RUTH.BONNEVILLE@FREEPRESS.MB.CA

Hi Rochelle, I thought you might be interested in the recent litter here in Winnipeg. Might be a record # of babes for a golden. This is a breeder who my parents got their golden boy from a few years back.

A groomer and breeder from Winnipeg is trying to keep a low profile after her Golden delivered 17 pups last week. Good luck with that! That number actually shares a record for highest number in a single litter as registered by the Canadian Kennel Club.

The record largest litter, as noted by the Guinness World Records, was an amazing 24 from a Neapolitan Bull Mastiff in England.

Dog breeders Damian Ward and his girlfriend Anne Kellegher had only been expecting 2-year-old Tia to give birth to a maximum of 10 puppies — not two dozen. But when Tia grew so big that she could barely move, the couple took her to the veterinarian, who decided that an immediate caesarean was vital. Two hours later, Tia had given birth to a record-breaking 24 puppies. Unfortunately, four of the puppies were too weak and died but the remaining 20 are thriving.

Thankfully, ALL 17 puppers in this Golden litter, are thriving and gaining weight, and getting lots of wonderful care from their momma Giselle.

Giselle feeds some of her puppies, who were born last Wednesday. Photo by RUTH.BONNEVILLE@FREEPRESS.MB.CA

The C-section hasn’t hurt Giselle’s ability to nurse her pups, but her owners try to make it easier for her. “We help her lie down and get on her side.” And they keep her well-fed so she can nourish her pups. “She has home-cooked chicken, carrots, rice, sweet potatoes and garlic, and cheese and eggs.”

Giselle’s nursing half of her pups every two hours with Dinah bottle-feeding the other half of the litter. Then they switch at two-hour intervals. “It’s very time-consuming.” But well worth it, said the owner. “She’s looking really well and she’s doing well.” The pups are kept under heat lamps and are starting to move around. …

“The fun part is in four or five weeks when the pups go loose,” and run around the house. “That’s going to be really fun to see.”