Recently, I shared a video of Brendan Mcgraw and his Golden Retriever Coomba. Coomba is a ski patrol avalance dog in training.

Well, I’m back with more Avalanche Dog puppy training. Check out Coomba and Jackson, Golden Retriever puppies currently training to be ski patrol avalanche dogs. Both dogs (and handlers) will be doing their official test in a few weeks. Once the test is complete the dogs will be given a cross to go on their vest, and be part of Heavenly Resort’s avalanche rescue team.

Wishing good luck to Brendan, Coomba, Jeremy and Jackson on their upcoming tests.

Well, we are waiting for the blizzard conditions and predictions of up to three feet of snow. Poor little Golden Alfie is not going to like it. But, I wouldn’t like it either with my tush exposed on the snow trying to do my business.

So, chill out with Brendan Mcgraw and his Golden Retriever Coomba. Coomba is a ski patrol avalance dog in training. This short video, with an almost 1-year-old Coomba, comes at the end of his first season on the mountain. Boy, is he something!

This article is a very sad commentary on the utilization of innocent dogs for quite dangerous endeavors. While I do realize the life-saving that takes place via our canine friends at times such as earthquakes or on the slopes due to avalanches, I could never engage a dog of my own in such a field.

This Alpine Meadows video features search and rescue dog training in conjunction with the Placer County Sherriff Search and Rescue, and the Placer County Sheriff’s Search and Rescue Tahoe Dog Team. It was a real carnival for the Golden Retrievers and other breed dogs with helicopter rides, treasure hunts in the snow and non-stop games all designed to train them to sniff out and save buried avalanche victims.

The American College of Veterinary Ophthalmologists (ACVO) in association with Pet Health Systems, will host an unprecedented event in veterinary medicine the week of May 12, 2008. Over 140 board certified veterinary ophthalmologists will provide FREE eye exams to America’s Service Dogs. Pet Health Systems will provide a FREE lifestyle assessment, a biochemical profile, and complete blood count through their Pet Wellness Report and primary care veterinarians. It is anticipated that through these efforts Service Dog Health can be improved and potential disease averted.

Qualifying Service Dog groups include: guide dogs, mobility assistance dogs, detection dogs, and search & rescue dogs. Dogs must be active ‘working dogs’ that were certified by a formal training program or organization or currently enrolled in a formal training program to qualify. The certifying organization could be national, regional or local in nature. Essentially the dogs need to have some sort of certification and/or training paperwork to prove their status as a working Service Dog to participate in this year’s program. 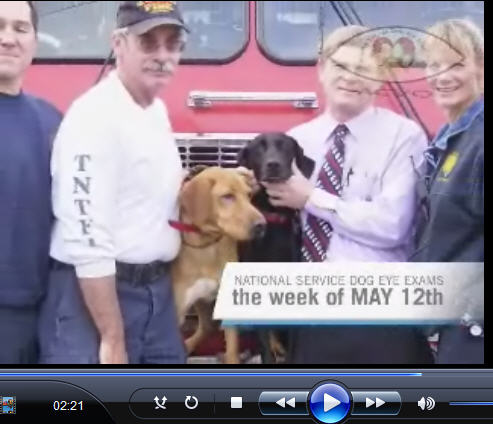 Click here for the steps to participate and to Register

This is one great video news clip that shows avalanche dogs during some training exercises. Check out Boot, an incredible Golden Retriever Avalanche Dog

SQUAW VALLEY — Murphy, a 3-month-old golden retriever, is a fourth-generation ski patrol dog at Squaw Valley USA. But, like any rambunctious puppy, Murphy seemed blissfully unaware of the avalanche training going on around him Wednesday morning as he sat in the snow and gnawed on his leash. “He’s on fire” with excitement, said Murphy’s handler, Eric Seelenfreund of Squaw Valley’s ski patrol.

Starting out with simple lessons, Murphy practiced “puppy runaway” drills, where Seelenfreund would hide in a snow cave and let the young pup find him.

Twelve ski patrol dogs and their handlers from Squaw Valley and other area resorts joined Murphy and Rasco, his golden retriever sire, during a week-long training and certification event with the Placer County Avalanche Canine Team.

Using dogs to rescue avalanche victims “really came to fruition within the last two to three years,” said Placer County Sheriff’s Sgt. Dan Ingalls. In the past, area resorts haven’t had a certified canine team as a resource for avalanche searches, Ingalls said. Response time is critical for such rescues, he said.

“One canine team is just as effective as 45 searchers,” Ingalls said.

Craig Noble, head of the avalanche dog program at Squaw Valley, agrees that using ski patrol dogs to locate a victim caught in an avalanche is highly effective. Noble said the ski patrol dogs “are sort of like an insurance program.” 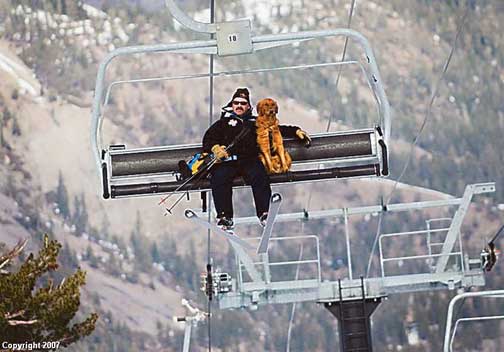 Coming to save you this winter: Trained dogs go after avalanche victims
By Siobhan McAndrew, Reno Gazette-Journal

For the last two years, Shooter Slusser has learned the ins and outs of Alpine Meadows ski resort. He knows the faces of the skiers and which ski lifts go to green trails and which go to double black diamonds.

As a valued member of the ski patrol, he received his avalanche certification in Utah and maintains his skills by training at least once a week in search and rescue techniques. And instead of a paycheck, Shooter is content with being paid in dog food. Shooter, a golden retriever, is one of eight avalanche rescue dogs used at Alpine. Local ski resorts including Squaw Valley, Kirkwood Ski Resort and Mammoth Mountain have had avalanche dog programs for more than 20 years.

“Dogs are just one part of what we have in case of an emergency,” said Brian Slusser, Shooter’s owner and a member of Alpine’s Ski Patrol for 15 years.

Slusser brought Shooter up to Alpine last year when he was a puppy to get him familiar with ski lifts, skiers and the veteran rescue dogs. “Getting them used to all sorts of situations is the first step in training a dog used for rescue,” said Slusser.

This year, Shooter has been trained to do live rescues. Beginning as a puppy, dogs are taught games of run away and fetch using two people. One person holds the dog, while another person runs away. The dog is released and taught to find the runaway person. That leads to a three-person runaway game — one person holds the dog, one person runs and hides and another person covers the simulated victim with snow. 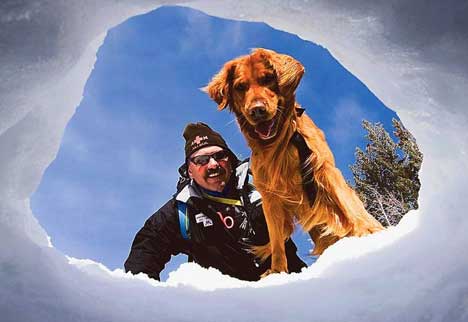 Click here to learn more about Being Buried Alive.  And, to see a very cool video of an  Avalanche Golden during training making a find, just click here.

Is this photo cool or what? It shows Sean Macedonio, a ski patroller, and his Golden dude King. An Avalanche SAR Golden, he’s trained to dig through the snow to rescue those who are trapped. You can learn more about this special working field at our site’s page on Search and Rescue.

MAMMOTH LAKES, Calif. — I was buried alive. A pale blue light filtered through two feet of snow over my head. I could hear muffled voices, but I stayed quiet and tried to imagine what it would be like to be buried in a real avalanche.

In early February, I was a volunteer victim in a rescue training exercise here. Ski patrollers at Mammoth Mountain Ski Area had dug a small snow cave, big enough for me to lie on my side, and covered the entrance with snow. They punched in some air holes so I did not have to worry, and it was surprisingly warm in the cramped space — snow is, after all, a good insulator. The patrollers supplied me with a small two-way radio and checked in every few minutes to make sure I was all right.

If all were to go as planned, a 2-year-old golden retriever named King would find me and dig me out. But first I had to wait until my scent could be detected through the snow. To make the situation more realistic, the patrollers scattered skis and poles and said they would be shouting when King made his appearance, riding on a snowmobile with his trainer and owner, Sean Macedonio.

Macedonio, who has been a ski patroller for 13 years at this large resort in California’s Eastern Sierra, has been training King for avalanche rescues. When King is not out on the mountain, he rests in a kennel at the ski patrol office in the main lodge. Macedonio has trained King to ride ski lifts, sleds and snowmobiles.

The resort pays for training courses in Utah and contributes toward King’s upkeep, although he is Macedonio’s dog and goes home with him at night. Macedonio helps raise money for King’s food and veterinarian bills by selling T-shirts and hats with a logo of a paw print.

Bill Cockroft, a senior vice president at Mammoth Mountain, said Macedonio’s passion got the program started. Like other ski areas with steep terrain and heavy snowfall, Mammoth Mountain has an aggressive avalanche-control program. Ski patrollers use a 105-millimeter howitzer on loan from the Army and hand-thrown charges to release snow before it becomes a danger. But unexpected slides occasionally occur.

That happened here last season when two skiers were partly buried. Macedonio took King to the site, and they helped search the area to make sure no one else was buried.

When Michael Freeman and his dog hiked down to Maria Ampuero Stehle and her husband, Arnaud, in a deep canyon in Castle Rock State Park on Thursday afternoon, Susanna did not hide her joy at seeing the lost couple she helped find. “She was very happy,” Freeman said. “She was barking loudly and jumped around. She got dirt on them.”

Nicknamed Susie, the 5-year-old golden retriever is the quintessential search and rescue dog. She loves to fetch and bark, but she is happiest when she is working. Locating the San Jose couple that had been missing Saturday was just a good day’s work for the dedicated canine. “She’s very much a career girl and pretty focused,” Freeman said. “She has her pleasures. but she’d rather work than goof off.”

Susanna and Freeman are members of WOOF, one of two statewide organizations that are approved by the state Office of Emergency Services to provide dogs for search operations. The retriever also is certified as an “area search dog” and as a Type II cadaver dog, which means she can help locate the remains of people, too.

And there’s more: “She protects the citizens of Santa Clara and Santa Cruz counties as an avalanche dog,” said Freeman, 62, who retired a couple of years ago as general counsel for Silicon Valley start-up companies.