ROBIN IS THE FIRST GOLDEN RETRIEVER IN HISTORY to win the American Kennel Club Humane Fund Award for Canine Excellence (ACE) in Law Enforcement [2009]. This is an incredible feat and we are so proud that Mary MacQueen and her Golden Robin are the recipients. We came to know about Mary’s exceptional work in 2002 when she shared the story of Golden Working Dog-in-Training Buddy, and continue to be amazed by her strong work ethic. We initially blogged about Robin a little over a year ago.

Robin also is the recipient of the 2010 Golden Retriever Club of America (GRCA) Gold Standard Award. This award is presented to honor a Golden who performs honorable, heroic acts or who enriches, inspires or contributes to the lives of individuals and communities.

Eight-year-old Golden Retriever Robin (Am-Can Ch. Nitro’s Boy Wonder SDHF BISS TDI CGC, Police K-9/Search and Rescue Dog) and Mary MacQueen have worked for the Salamanca Police Department, the Cattaraugus County Sheriff’s Office, and assist with searches for the Southern Tier Regional Drug Task Force in Western New York State. In 2009 alone, Robin had been responsible for getting about half a million dollars worth of dangerous narcotics off the streets. 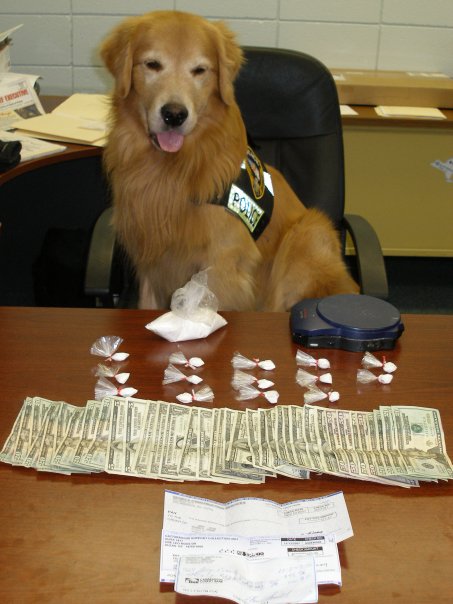 Robin and Mary’s work with the Cattaraugus County, NY Sheriff’s Office included jail & vehicle searches, school searches, and searches during community festivals. Robin, the second narcotics certified K-9 in Cattaraugus County, is their first to be allowed to search people/students due to his easy going temperament and passive “sit” alert when he locates drugs.

Robin and Mary were recipients of the 2008 Police Officer of the Year award for the Salamanca Police Department. In addition to his work in law enforcement, Robin is also a therapy dog, AKC Canine Good Citizen, AKC Champion of Record, and the recipient of the Golden Retriever Club of America’s Show Dog Hall of Fame title.

When Robin’s busy schedule allows, he also leads local parades, visits hospitals and nursing homes, and makes trips to schools to educate students about the dangers of drug abuse. They say during community events and fundraisers that he can often be seen carrying a donation basket or lunch box filled with candy for the kids.

BUT, MARY’S EMAIL TO ME  YESTERDAY DID NOT BRING GOOD NEWS
On October 18, 2010 we received a very sad email from Mary about her special boy Robin, his being diagnosed with an aggressive form of cancer on October 15th, two days after his eighth birthday.

Needless to say, I am still reeling from this horrible news. I have our first Oncology appointment on Wednesday at 11AM at Cornell University. They said it is an all day appointment filled with blood work, scans, ultrasounds, and x-rays. The original mass removal was done by my vet, but the histopathology was done at Cornell, so there was probably little room for error in the diagnosis which was Cutaneous Epithelialtropic Lymphoma. They said it was in the early stages for this aggressive form of cancer, so we are confident that this is the ONE special dog who will beat this disease!

While there is never a good time to get a cancer diagnosis, the situation has been compounded by Mary and Robin being laid off from the Salamanca Police Department on Oct 11th due to the Seneca Casino/NY state disputes.

Robin’s medical bills are not covered by his police department, and the treatment will be both extensive and expensive. Please help us save this dog who has given so much of his life for his community. Make a tax-deductible donation today …. designating it solely for Robin’s care. The money will be directly applied to his care at Cornell University

And, please spread the word by having folks come to http://bit.ly/4robin

This Shiba Inu puppy is too sweet. The sounds are too adorable for words.