We have detailed hundreds of famous folks who are owned by Goldens, many wonderful authors included in the ranks. One of these celebs is David Rosenfelt, who just loves to utilize Golden themes in his GReat books of fiction. We blogged about David almost 3 years ago (here) but wanted to update folks on his latest books and appearances.

David actually describes himself at his site as a novelist with 27 dogs! He further says this:

A number of years ago, I left the movie marketing business, to the sustained applause of hundreds of disgruntled producers and directors. I decided to try my hand at writing. … About fourteen years ago, my wife and I started the Tara Foundation, named in honor of the greatest Golden Retriever the world has ever known. We rescued almost 4,000 dogs, many of them Goldens, and found them loving homes. Our own home quickly became a sanctuary for those dogs that we rescued that were too old or sickly to be wanted by others. They surround me as I write this. It’s total lunacy, but it works, and they are a happy, safe group.

Athough David and his wife Debbie Myers, no longer run the rescue, their home is still offered as a sanctuary.

“In my office, there’s usually 15 [dogs] at any one time,” Rosenfelt says, strolling through his house and counting off the dogs: eight in the kitchen, more over here in the hall. “The house looks like a Civil War battlefield—bodies lying everywhere.”

The dogs in residence never fight, not even during the lengthy feeding times (it can take hours to feed a hungry herd). In fact, Rosenfelt says he has only had one serious canine squabble in all his years as a modern-day St. Francis.  “Somehow, rescued dogs are grateful,” he says. “They just know.”

Rosenfelt, who is the author of such popular mysteries as “Sudden Death” and “Bury the Lead,” once took an unwanted dog with grand maul seizures from Kentucky, and two more pups were bequeathed to him in a woman’s will. These two (a Labrador-mix and American Eskimo) came from a stranger who, impressed by Rosenfelt’s dog-loving nature, issued this caretaking act as her last request. “You can’t turn down a dying wish,” he says.

Of course, David does admit that while he wasn’t always a dog lunatic, now he is definitely over the top. It all began in 1993 when he was caring for his dying Golden Tara. He had begun doing volunteer work at shelters and was troubled by the number of people throwing their dogs away. The Tara Foundation was created and 4,000 dogs were saved in her memory. And, I’m sure that Tara will live on in the books that her doting dad continues to write.

In fact, I can guarantee that Tara’s presence will always be a part of David’s Andy Carpenter series, given this 2004 article.

Here is David talking about his 2009 book, New Tricks, surrounded by his Golden family.

For folks in Houston, there is a special treat coming up that is definitely not to be missed. On Saturday evening, August 28th, the Golden Beginnings Golden Retriever Rescue is having David Rosenfelt present Dog Tags, the latest novel in his Andy Carpenter series, featuring the smart-mouthed attorney and his beloved rescued Golden Retriever Tara. He’s a great speaker, and the evening will also feature a delicious buffet, a fun raffle and a silent auction. The event takes place from 6-9 pm at Houston’s French Alliance historic residence at 425 Lovett Blvd. (one block south of Westheimer at Whitney). There is a suggested donation of $10.

Here are our favorite books from David’s Andy Carpenter (with Golden Retriever Tara) series, most with extensive excerpts to wet the appetite.

DOG TAGS (2010)
A German Shepherd police dog witnesses a murder and if his owner–an Iraq war vet and former cop-turned-thief–is convicted of the crime, the dog could be put down. Few rival Andy Carpenter’s affection for dogs, and he decides to represent the poor canine. As Andy struggles to convince a judge that this dog should be set free, he discovers that the dog and his owner have become involved unwittingly in a case of much greater proportions than the one they’ve been charged with. Andy will have to call upon the unique abilities of this ex-police dog to help solve the crime and prevent a catastrophic event from taking place. Click here to read an excerpt. 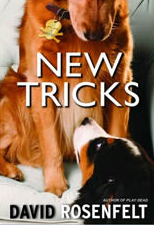 NEW TRICKS (2009)
Andy Carpenter gains possession of an adorable Bernese puppy whose owner was brutally murdered. Few can rival Andy’s affection for dogs, and he will do whatever it takes to insure that this little pup doesn’t fall into the wrong hands. However, his playful new friend is valued by several people, many of whom are willing to resort to violence to get what they want. It will take more than Andy’s usual courtroom theatrics to save this dog, including a little help from his beloved golden retriever, Tara. Andy soon discovers that anyone around him is in danger, including his long-time girlfriend Laurie, and he will have to muster all of his wits to save those he holds most dear. Click here to read an excerpt.

PLAY DEAD (2007)
Few can rival attorney Andy Carpenter’s affection for golden retrievers, especially his own beloved Tara. After he astonishes a New Jersey courtroom by successfully appealing another golden’s death sentence, Andy discovers that this gentle dog is a key witness to a murder that took place five years before. Andy pushes the boundaries of the law even further as he struggles to free an innocent man by convincing an incredulous jury to take canine testimony seriously. It will take all the tricks Andy’s fertile mind can conceive to get to the bottom of a remarkable chain of impersonations and murder, and save a dog’s life-and his own-in the process. Click here to read an excerpt.

DEAD CENTER (2006)
Trading the refineries and factories of Paterson for the frozen pastures of Findlay, Wisconsin, Andy soon finds himself in a small town handling a big-time double homicide case. He looks into Jeremy’s romance with one of the victims…and the possible involvement of a bizarre religious cult—one that may sanction the most unholy, and vicious, of acts. While Andy tries to save Jeremy, make sense of his love life, and find a decent pizza for his beloved dog, Tara, the secrets of an ultra-religious community begin to rain down on him like bricks from a cracked fortress. Click here to read an excerpt.

His streak of murder case acquittals made him a regular on cable talk shows. His recent $22 million inheritance bought him a dog rescue operation named the Tara Foundation after his own beloved golden retriever. Yet after turning down cases left and right, Andy Carpenter thinks he’s facing a midlife crisis. He knows he needs to get back to some real work as fast as a felonious world will allow. Click here to read an excerpt.

FIRST DEGREE (2003)
An unabashed animal lover, Andy Carpenter has established a fast reputation as that rare lawyer who saves both dogs and humans from Death Row. Lately, with his newfound fortune, he has given up his home in the fashionable suburbs and returned to the house in which he grew up in the asphalt heart of Paterson. These days his office is eerily quite, except for the scraping pen of his secretary, Edna, as she navigates across and down the New York Times crossword puzzle. Though his wallet isn’t hurting, Andy’s soul hungers for a case to sink his legal teeth into. he’s about to get his wish. And it’ll be a first degree kick in the head. Click here to read an excerpt.

OPEN AND SHUT (2002)
Attorney Andy Carpenter’s legal maneuvers are legion in and out of the courtrooms of Paterson, New Jersey. A talented lawyer who knows how to play all the cards, he is torn between mending a marriage that no longer works and growing attached to a beautiful, no-nonsense private investigator. Besides his love for sports, Andy also adores Tara, a golden retriever clearly smarter than half the lawyers who clog the courts of Passaic County. Then one day the fun stops. Click here to read an excerpt.

Andy Carpenter gains possession of an adorable Bernese puppy whose owner was brutally murdered. Few canrival Andy’s affection for dogs, and he will do whatever it takes to insure that this little pup doesn’t

fall into the wrong hands. However, his playful new friend is valued by several people, many of whom are

willing to resort to violence to get what they want. It will take more than Andy’s usual courtroom

theatrics to save this dog, including a little help from his beloved golden retriever, Tara. Andy soon

discovers that anyone around him is in danger, including his long-time girlfriend Laurie, and he will

have to muster all of his wits to save those he holds most dear.