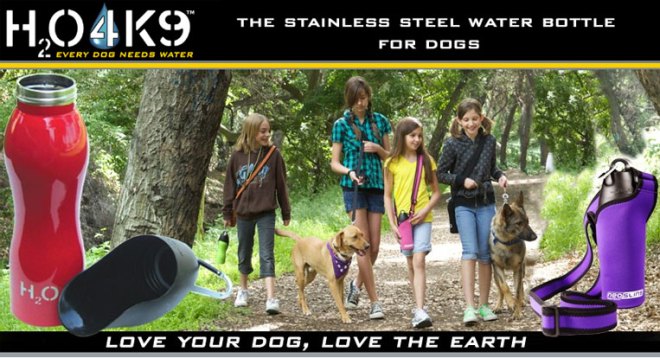 Sixty-three percent of Americans own at least one companion animal, and sadly, most are virtually unprotected from toxic chemicals. A recent study published in April 2008 showed that  dogs and cats were contaminated with 48 of 70 industrial chemicals tested, including 43 chemicals at levels higher than those typically found in people. You can avoid chemicals leaching into water by not using plastic bottles. We only use stainless steel BPA FREE water bottles now for our dog walks.

In a Harvard School of Public Health study published in May 2009, BPA, the chemical used to make plastics, was found to leach from polycarbonate drinking bottles Into humans. In fact, drinking cold liquids from polycarbonate bottles for just one week increased urinary BPA levels by more than two-thirds. Exposure to BPA, used in the manufacture of polycarbonate and other plastics, has been shown to interfere with reproductive development in animals and has been linked with cardiovascular disease and diabetes in humans.

April 28, 2009 — With all of the bad press swirling around certain types of plastic lately, regular old plastic water bottles have maintained a reputation as safe, at least as far as human health is concerned. New evidence, however, suggests that plastic water bottles may not be so benign after all.Scientists in Germany have found that PET plastics — the kind used to make water bottles, among many other common products — may also harbor hormone-disrupting chemicals that leach into the water.It’s too soon to say whether drinking out of PET plastic bottles is harmful to human health, said lead researcher Martin Wagner, an ecotoxicologist at Goethe University in Frankfurt. But it now appears possible that some as-yet unidentified chemicals in these plastics have the potential to interfere with estrogen and other reproductive hormones, just as the infamous plasticizers BPA and phthalates do.

“What we found was really surprising to us,” Wagner said. “If you drink water from plastic bottles, you have a high probability of drinking estrogenic compounds.”

The study adds to growing concerns about products that span the plastic spectrum, added Shanna Swan, an epidemiologist at the University of Rochester School of Medicine and Dentistry in New York. “This is coming at a good time because the use of bottles for consuming water is getting very bad press now because of its carbon footprint,” she said. “It’s just another nail in the coffin of bottled water, the way I see it.”

Wagner and a colleague used genetically engineered yeast to analyze 20 samples of mineral water. Nine samples came our of glass bottles. Nine were bottled in PET plastic. And two were in cardboard, juice-like boxes. The specialized yeast — which change color in the presence of estrogen-like compounds — revealed estrogenic activity in seven of the nine plastic bottles (and both cardboard samples), compared with just three of the nine glass ones. Overall, Wagner said, levels of these compounds in the water were surprisingly high.

German mineral water comes from natural springs. So, to see if the estrogenic compounds were actually coming from the water itself, Wagner emptied the bottles and replaced the water with a pure snail medium and a tiny species of snail that is especially sensitive to estrogenic compounds. Eight weeks later, female snails living in plastic bottles had more than twice as many embryos inside their bodies compared to the glass-grown snails. “Something from the plastic,” Wagner said, “must have leached out and changed the reproductive patterns of our snails.”

Wagner cautions against jumping to conclusions. Water is still a healthy beverage, he said. And until the compounds at work in the snail study have been identified, it’s just not possible to know if PET plastics pose a human health risk. Still, tests in his lab have shown far less estrogenic activity in tap water than in even the most “ultra-pure” bottled waters.

“Having done all of these experiments, I started drinking tap water,” Wagner told Discovery News. “It might have other stuff in it, but at least it doesn’t have estrogenic compounds.” It may also be time, Swan said, to reconsider how safe the so-called “safe” plastics really are.

H2O4K9 25-oz. Stainless Steel Dog Bottle & Bowl
H2O4K9 is a new 2009 team of creative professionals (all with canine companions) with backgrounds in industrial design, marketing, art and business. They have developed the  the first stainless steel water bottle for dogs, so unique due to its lid, which was designed specifically to fit a dog’s natural drinking style.

Learn more about this great new product at http://bit.ly/dog-water.