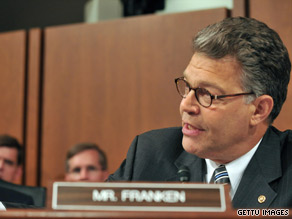 I’ve posted about Al Franken here, here & here, and continue to be so impressed by what he is trying to do in truly making a difference for his constituents. He is a dog lover, of course, as one would expect him to be. A Labrador Retriever guy, in fact.

Contributing Editor Warren Kalbacker squared off with Franken for hours across the comic’s dining room table while Franken’s Labrador relaxed underneath. “He is a thoughtful host,” Kalbacker reports. “He’s intense and obviously opinionated. He’s also physical. He interrupted our sessions a couple of times to wrestle his huge retriever into a headlock.”

It was very hard to learn about his beloved Kirby.

Franken shifts positions and pulls his wallet out of his back pocket and throws it on the coffee table next to a wooden bowl full of fake cherries Franni bought at Target. It’s all chewed up—the work, he says, of the late Kirby, the dog pictured in the Vikings helmet in the campaign slideshow and also framed on the wall in this room. “Now I don’t want to get rid of it, because Kirby did this,” he says, looking at the gnawed wallet. “Because we had to put Kirby down about a month ago. It was awful. He was only 8. He had cancer in his leg, in his bone, and at any minute his bone could shatter. And so I would have cut his leg off—I’ve seen some very happy three-legged dogs—but it had metastasized, so we had to put him down, and it was just awful. You know, it’s the whole family being with Kirby and hugging him while he’s being injected, and it’s the worst.” Franken’s voice is cracking a little. “Let’s not bring it up anymore, because I get upset,” he says, wiping his eyes. “I get really … boy, that was a terrible day. That was a terrible weekend. Really tough. George Carlin once said that anytime you buy a dog you’re buying a tragedy.” He laughs but he has to wipe his eyes again, and again he asks that we move on to another topic, so I ask about what kind of politics he was raised with.

“Great. You go from my dog to my parents. Gimme a second. Sheesh.” Franken takes his glasses off, and Franni comes in and wipes his eyes with her thumbs. She holds his face in her hands and says, “Why don’t you excuse yourself for a minute?”

So, learning that his first goal as a new Senator was to provide Service Dogs for war veterans did not surprise me in the least. He has obviously done his homework and knows how dreadfully expensive (~$25,000 per dog) it is to train these types of service dogs. Hoping to provide hundreds of them to veterans through his bill would be something, for sure.

“Service dogs … can be of immense benefit to vets suffering from physical and emotional wounds,” Franken wrote in a column published in the Star Tribune. “Yes, they provide companionship. But they can also detect changes in a person’s breathing, perspiration or scent to anticipate and ward off an impending panic attack with some well-timed nuzzling. They are trained to let their masters know when it’s time to take their medication and to wake them from terrifying nightmares.” …

The Minnesota Democrat also said there is evidence to show that this kind of program could help reduce the suicide rate among veterans. “Frankly, I believe it is enough simply to improve the lives of those of whom we asked so much,” Franken wrote. “But this program isn’t just the right thing to do. It’s the smart thing to do. This is win, win, win, win.”

What is also fascinating is how this desire was spurred by his meeting Luis Carlos Montalvan and his Service Golden Retriever Tuesday at an inaugural event this past January, as noted in AL’s OpEd: Al Franken: A wounded veteran’s best friend: A chance encounter inspires my first bill — Legislation making the service dog program more affordable for our troops.

Luis had been an intelligence officer in Iraq, rooting out corruption in Anbar Province. In 2005, Capt. Montalvan was the target of an assassination attempt. Now he walks with a cane and suffers from severe post-traumatic stress disorder. Luis explained that he couldn’t have made it to the inauguration if it weren’t for his dog.

As someone who’s spent time with our troops in Iraq and Afghanistan on USO tours and met wounded warriors at Walter Reed and Bethesda, I feel a deep obligation to the men and women who have risked life and limb on our behalf.

After I met Luis, I did some research. Service dogs like Tuesday can be of immense benefit to vets suffering from physical and emotional wounds. Yes, they provide companionship. But they can also detect changes in a person’s breathing, perspiration or scent to anticipate and ward off an impending panic attack with some well-timed nuzzling. They are trained to let their masters know when it’s time to take their medication and to wake them from terrifying nightmares.

Service dogs raise their masters’ sense of well-being. There is evidence to suggest that increasing their numbers would reduce the alarming suicide rate among veterans, decrease the number of hospitalizations, and lower the cost of medications and human care.

Veterans report that service dogs help break their isolation. People will often avert their eyes when they see a wounded veteran. But when the veteran has a dog, the same people will come up and say hi to pet the dog and then strike up a conversation.

Two months ago I posted about this special team: Sit! Stay! Snuggle!: An Iraq Vet & his Service Golden Retriever Tuesday.

Like any other golden retriever seeking a treat, Tuesday nudged his owner’s hand with his snout one recent morning and waited expectantly. Luis Carlos Montalvan got up from a chair in his small Brooklyn apartment and walked to the kitchen. Tuesday followed close behind, eyes fixed on a white cabinet. The retriever sat alertly as Mr. Montalvan, an Iraq war veteran with severe post-traumatic stress disorder, reached for a vial of pills, lined a half-dozen on the table and took them one by one.

The dog had gotten what he wanted: When the last pill was swallowed, he got up and followed his master out of the kitchen, tail wagging.

Tuesday is a so-called psychiatric-service dog, a new generation of animals trained to help people whose suffering is not physical, but emotional. They are, effectively, Seeing Eye dogs for the mind.

Tuesday is with Mr. Montalvan at all hours. Taught to recognize changes in a person’s breathing, perspiration or scent that can indicate an imminent panic attack, Tuesday can keep Mr. Montalvan buffered from crowds or deliver a calming nuzzle. Other dogs, typically golden retrievers, Labradors or Labrador retriever blends, are trained to wake masters from debilitating nightmares and to help patients differentiate between hallucinations and reality by barking if a real person is nearby.

“Tuesday is just extraordinarily empathetic,” said Mr. Montalvan, 36 years old, a retired Army captain who received a Purple Heart for wounds he suffered in Iraq. “In bad moments, he’ll lay his head on my leg, and it’ll be like he’s saying, ‘You’re OK. You’re not alone.'”

Here are two of the video clips detailing this wonderful working union.

Senator Franken’s bill, the Franken-Isakson Service Dogs for Veterans Act, was passed unanimously in July, tacked onto the Defense Authorization. However, now it must pass a joint committee to become law.

Specifically, the Franken-Isakson Service Dogs for Veterans Act will: