Britain’s only lifeguard dog Bilbo made a special video appeal to get his job back. Bilbo – a 14-stone Newfoundland – made the Baywatch-style film to show himself in action after he was axed from his post in May 2008.

The seven-year-old Newfoundland, who has been credited with helping save three lives at Sennen Cove in Cornwall, lost his job when the Royal National Lifeboat Institution (RNLI) decided that his services were no longer required.

This is quite a talented boy. You can read here about his early training and sensitivity to the job.

This film and resultant petition must have worked, because this wonderful boy will back this summer (2009) working on the beach.

Back by popular demand: Bilbo the ‘Baywatch’ dog: Campaigners delighted to see return of canine lifeguard
By Jonathan Brown, The UK Independent, March 28, 2009

With his lustrous mane of brown hair, well-toned 14-stone physique and powerful swimming action, Bilbo the dog would have been a welcome addition to the cast of Baywatch.

His instinct for saving lives and determination to leap into crashing seas rivals that of David Hasselhoff and Pamela Anderson in their prime and made him an instant hit with the surfers and bathers around Land’s End in Cornwall where he lived.

So when the chocolate Newfoundland found himself ordered off the beach where he had successfully been passing on a safe swimming message to holidaymakers for two years it was unsurprising the decision would generate uproar.

Thousands of people signed petitions demanding Gordon Brown – and the Queen – intervene and persuade officials to reclassify the six-year-old pooch alongside guide dogs as a legitimate working animal and allow him back to his rightful place alongside his lifeguard owner.

And yesterday, to the delight of his supporters across the world, it was confirmed that Bilbo had prevailed and would now be allowed to return to Sennen beach and others where he is credited with having directly taken part in at least three rescues as well as indirectly saving scores more from getting into difficulties.

His owner Steve Jamieson, who at 57 is Britain’s longest-serving lifeguard and now area supervisor for the RNLI, which is responsible for beach safety on the western tip of Cornwall, said he was delighted at the decision.

“The people not just in Cornwall but the whole of the UK have taken Bilbo to their hearts and, in the end, something had to be done about it. The council and the RNLI have done a stalwart job while Bilbo is ecstatic that he will be able to get back on the beach,” he said.

Problems started when Bilbo, who had earlier been banned from riding the lifeguards’ quad bike because of health and safety reasons, fell foul of blue flag regulations that excluded all dogs except guide dogs from the sands. A compromise was eventually reached allowing him to “work” on a part-time basis.

But supporters argued that Bilbo’s track record diving into the foaming depths, warding off swimmers on rough days and his vital role showing bathers they should only swim between the safety flags, should make him a permanent exception to the no-mutts rule.

More than 10,000 people signed a paper petition; a further 2,275 put their names to one on the No 10 website, while 7,000 joined a Facebook group. There was a popular website, a YouTube film and even a biography, The True Story of Bilbo the Surf Lifeguard Dog, for which Bilbo will be attending a signing in Truro today.

Mr Jamieson said Bilbo was a prodigious swimmer. Later this year, he will take part in the annual Newlyn to Penzance open water swim as usual, expecting to complete the one-mile course in a respectable 30 minutes. Newfoundlands were long valued by New World whalers for their ability to rescue mariners flung overboard.

Bilbo has spent recent years visiting schools helping children learn the basic rules of safety around water. Sporting a red and yellow jacket he shows swimmers where it is safe to bathe and has had a dramatic effect. At Sennen beach, before Bilbo’s arrival, lifeguards would make between 20 to 30 rescues each season. That fell to 12 and, in his last full year, lifeguards were called on to make just a single intervention. 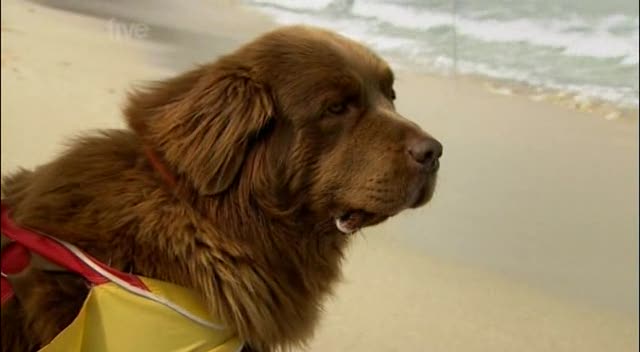 Or, click here to see the wonderful new video.

2 thoughts on “Bilbo: Life Saving Newf returning to the job!”