On February 25, 2009 I provided the post below. But, it was not complete as I was still waiting anxiously for the Library of Congress to add the webcast of their “Sketches of a Life” commissioned piece. Well, it was just posted on its Web site. And, it does not disappoint.

Folks definitely need to take the time out to experience this special gem. Stevie alternates between three different instruments, surrounded by a 21-piece chamber orchestra, surely an event you would not ever expect to see. His early classical training shows through and one sees an artist that can master it all.

Stevie’s commissioned piece is then followed by two delightful encores of “Overjoyed” and a sing-along of “My Cherie Amour.”

As Shepard Fairey’s iconic HOPE portrait came to represent Barack Obama’s candidacy for President in 2008, Stevie Wonder’s music and exuberance came to symbolize the the campaign’s soul. His music (songs like “Signed, Sealed, Delivered” and “Higher Ground”) was heard at nearly every campaign stop.

Honestly, I think very few folks can resist Stevie Wonder’s music, or deny his incredible talents. Already one of the most decorated artists in pop music history, a Rock and Roll Hall of Famer with 25 Grammy Awards and an Oscar, on Sept 2, 2008, the Library of Congress named Wonder the winner of its second Gershwin Prize for Popular Song.

Monday night Wonder received the award, also performing a new piece commissioned by the library for the celebration.

Stevie Wonder reminisced Monday night about getting “talking books as a little boy from the Library of Congress” before premiering a new song commissioned by the library, which will award him its Gershwin Prize for Popular Song. I didn’t know that anyone would ever ask me to do it,” says Wonder about the instrumental composition Sketches of a Life, which he played on two pianos and his signature harmonica, accompanied by a 21-piece chamber ensemble. He began working on the piece in 1976 and finished it in 1994, the day Nelson Mandela became president of South Africa.

Sketches draws upon his life experiences, including memories of his late mother, Lula Mae. “I can hear her voice, I can hear her joy, I can hear my cry of missing her,” he told reporters before the show in the library’s Coolidge Auditorium. “Those cries are really tears of joy, knowing that we are closer than ever to becoming a united people in the United States.”

The audience of about 450 included Wonder’s wife, two sons and brother, plus members of Congress and the family of George and Ira Gershwin, for whom the award is named. They gave the new composition a rousing standing ovation. Wonder thanked the crowd for influencing him: “You’ve allowed me to see that you’re able to see beyond color and to see into the soul of the heart.”

Wonder’s work had been initially recognized by the Library of Congress in 2005, his 1976 double album, “Songs in the Key of Life,” added to the National Recording Registry. This collection honors recorded works that are “culturally, historically or aesthetically important, and/or inform or reflect life in the United States.”

In writing this post, I learned that Stevie Wonder undertook the study of classical piano, and later, music theory. Such classical leanings, however, are not surprising.

At the Library of Congress last night, the Motown legend spoke of a longtime “love for classical music” — of listening to Stravinsky, Bach and Beethoven. And then Wonder ambled onstage at the library’s Coolidge Auditorium and gave the world-premiere performance of “Sketches of a Life,” a classical composition that he began writing in 1976, when he was still at the peak of his pop-songwriting powers.

Accompanied by a 21-piece chamber ensemble, Wonder alternated between piano, electric keyboard and his trusty harmonica during a largely autobiographical work in nine movements. His melodic gifts were on generous display during the nearly 20-minute piece, though the chords tended to be darker and more haunting than the ones Wonder usually writes. The music, though, was no less lyrical or soulful.

He’s hardly a classical purist, of course: “Sketches” leaned at times toward pop show tunes and jazz. One movement was something like chamber funk, with Wonder vamping on the clavinet as the ensemble’s sound swelled. Another segment was basically a blues-jazz instrumental, with Wonder taking off on a lyrical harmonica run over piano chords and a swaying beat — all while jazz legend Herbie Hancock nodded his head in the audience.

Still, Wonder seemed comfortable with the form, and even displayed impressive restraint for a newcomer in the classical sandbox, staying away from bombast and saving the musical flyover for the triumphal, regal finale, which was full of horn fanfare.

This video below of Pavarotti & Stevie Wonder additionally shows Stevie’s comfort with classical performers. When asked about his own personal heroes and influences, Pavarotti was included. This song, “Peace Wanted Just To Be Free” from the 1998 performance, Pavarotti & Friends for the Children of Liberia, is just fabulous. Be sure to catch the end where you will see how genuinely moved Pavarotti was by Stevie’s performance.

“The Gershwin Prize was created to honor an artist whose creative output transcends distinctions between musical styles and idioms, bringing diverse listeners together, and fostering mutual understanding and appreciation,” James H. Billington, the Librarian of Congress, said in a statement. “Stevie Wonder’s music epitomizes this ideal.”

The prize, which was created last year, commemorates George and Ira Gershwin, the legendary American songwriting team whose extensive manuscript collections reside in the Library of Congress. The prize is awarded to musicians whose lifetime contributions in the field of popular song exemplify the standard of excellence associated with the Gershwins. Essentially, it is the pop music corollary to the Mark Twain Prize for American Humor. The first Gershwin Prize was awarded in May 2007 to Paul Simon.

Tonight, some mighty lucky folks will be able to experience Stevie Wonder and many other performers at the concert, In Performance at the White House.

President Obama might turn a few heads if he broke into song tonight while presenting Stevie Wonder with the Library of Congress’ Gershwin Prize for Popular Song. But Wonder would be unfazed.

During inaugural festivities in January, “I gave the president my harmonica,” Wonder says. “He said, ‘I can’t play this thing.’ But I said, ‘You could do anything.’ ” ….

Wonder remembers discovering George Gershwin through Sam Cooke’s rendition of Summertime. “Later I found out that came from Porgy and Bess, and was amazed to learn about all the different places and genres” his music drew on, and the diversity of artists who embraced it. “You have jazz musicians playing it and opera singers doing it. That’s incredible music.” 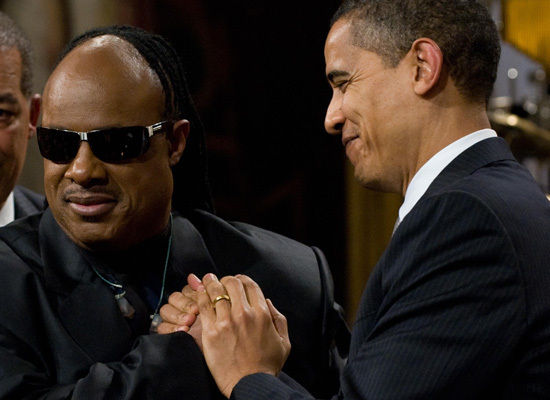 President Obama greets Stevie Wonder on Wednesday night during a concert in the East Room of the White House held to celebrate the musician being awarded the Library of Congress Gershwin Prize for Popular Song (Photo credit: SAUL LOEB/AFP/Getty Images)

Thankfully, the concert will be broadcast tomorrow on PBS at 8pm EST. It looks to be amazing. President Obama and First Lady Michelle Obama celebrated Stevie Wonder’s life and music, bestowing upon him the Library of Congress Gershwin Prize for Popular Song.

In an interview with Rolling Stone last year, the then senator said: “If I had one musical hero, it would have to be Stevie Wonder. “When I was at the point where you start getting involved in music, Stevie had that run with Music of My Mind, Talking Book, Fulfillingness’ First Final and Innervisions, and then Songs in the Key of Life. Those are as brilliant a set of five albums as we’ve ever seen.”

This was part of President Obama’s presentation of the award:

So, it is my extraordinary privilege to present the Library of Congress Gershwin Prize for Popular song to an artist who has stirred our hearts and our souls for a generation, whose music knows no boundaries, an inspiration to us all.

Stevie has always drawn on the incredible range of traditions in his music. From them he’s created a sound that at once uniquely American, uniquely his own, and yet somehow universal. Indeed, this could be called the American tradition – artists demonstrating the courage and talent to find new harmonies in the rich and dissonant sounds of the American experience.

Tonight’s prize is also personal for me. As Stevie knows, I’m a huge fan. And he has been a great supporter. When I was first discovering music, just like Michelle, it was Stevie’s albums that I found and his songs became the soundtrack of my youth. Through them I found peace and inspiration, especially in difficult times. And I think it’s fair to say that had I not been a Stevie Wonder fan, Michelle might not have dated me. We might not have married. The fact that we agreed on Stevie was part of the essence of our courtship.

And I’m not alone. Millions of people around the world have found similar comfort and joy in Stevie’s music, and his unique capacity to find hope in struggle, and humanity in our common hardships. This gift that music affords us, transporting us from the here and now, relieving us of our burdens, even if it’s just for the length of a song. And this gift given to us by artists like Stevie is something we can all share.

Here is another video of Stevie showing his versatility, in a magnificent duet with Tony Bennett: