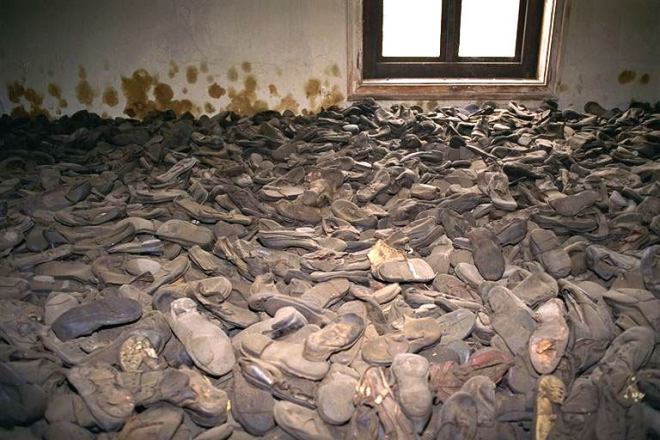 At Majdanek Concentration Camp, a roomful of shoes confiscated from those murdered

I feel quite strongly about us looking at the lessons of history so that we do not repeat the same mistakes over and over again. It is hard for me to get my head around the fact that there is a stubborn group of folks who deny the existence of the holocaust, and I agree with Dr. Deborah Lipstadt here:

This is not a debate. I have said many times I do not debate deniers. First of all, it suggests that there are two equal sides to the issue. would you expect a scientist to debate someone who believes the earth is flat? Of course not.

Secondly, deniers are notorious distorters and liars. [Some of those who simply parrot what others say — and Williamson may be in this category — may not realize the extent of the lies and the distortions.] And it is impossible to debate a liar. It is like trying to nail a blob of jelly to the wall.

It bothers me that the nonsensical news networks persist in showing both sides to an issue, even if one side is just spouting outright lies. Just consider the current economic crisis after 8 years of failed republican policies and tax breaks and the words of nobel laureate, Dr. Paul Krugman:

Thirty-six out of 41 Republican Senators voted for the proposed DeMint amendment to the stimulus bill — a massive package of permanent tax cuts that would create a huge hole in the budget, while doing very little to help the economy. There isn’t much room for bipartisanship when 87.8% of the other party is totally irresponsible.

But, getting back to the existence of the holocaust, I am simply in love with Professor Lipstadt who penned the following letter to Bishop Williamson who rather ridiculously says he is going to wait until he finds “proof” of the Holocaust before recanting his denial (in the face of demands by Pope Benedict).

It has come to my attention that you are looking for “proof” of the Holocaust. Let me assure you that such proof exists in reams.

The most expeditious means for you to determine that all the “claims” you have made both on your webpage and in interviews are completely bogus would be to read, in its entirety, the verdict of Judge Charles Gray who presided in David Irving v. Penguin UK and Deborah Lipstadt. The judgment can be found at http://www.hdot.org/trial/judgement

You will see there that each of your arguments is shown to be based on bogus documents, fabrications of evidence, or misinformation. This is what we call in common parlance: lies.

Other links can be found on my blog where we have prepared an extensive, point by point, refutation of your claims. This will also take you the Myths and Facts section of www.hdot.org, where you will find even more refutations of your various claims about the gassing process.

You may also want to visit to the Holocaust History Project, where you will find yet additional refutations.

Finally, I also suggest you read the expert report of Robert Jan van Pelt who carefully demolishes the various claims you and other deniers make about the gassing process.

You will see that your arguments are based on false and mistaken suppositions. In short, sir, there is no dearth of evidence. There is only a dearth of willingness to remove the blinders from one’s eyes.

Dr. Lipstadt’s letter bounced back so she sent a copy of it to the Argentinian headquarters of the SSPX, where Williamson is currently based. She also will be sending a copy of the letter to the headquarters.