From the BBK, this video shows Siberian tiger cubs at a Norfolk zoo have been enjoying their first experience of snowy weather. The paws on these cubs are just too, too cute . . . as well as the pouncing fun they are having.

And, from fellow Golden lover Wendy, I simply adore these snow booties on Service Golden Retriever Caesar. They actually look like a pair of my own high socks.

Caesar remains well and is thoroughly enjoying the snow we have here just now, went out in his new dog bootees today and was quite the comedian! 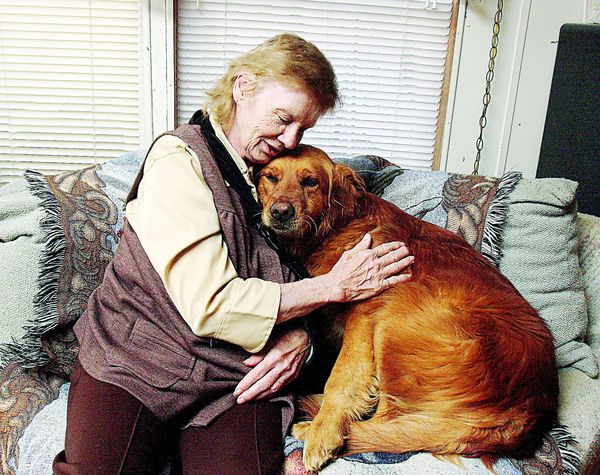 This news story by Andrew Dys is simply wonderful. I only wish I could see this special pair in person, so lucky to have each other.

Miller immediately fed the limping dog, which Miller described as “looking like a golden retriever but probably has some Irish setter in her.” Miller got some antibiotics for the dog in case the bites were infected. She bathed the dog’s wounds. She put a cover on the couch, and the dog jumped right up there and took a nap.

“This dog just needed a friend,” she said.

Miller is 71. She just had rotator cuff surgery on her shoulder, and the other shoulder needs the same. She can’t lift even a gallon of milk and has to go through physical therapy. She sure can’t lift a big dog. The physical therapist who comes to Miller’s home, Nancy Barbieri, said she was worried the dog was more than Miller could handle. “But I always have trouble getting Joyce to stop helping others and slow down and think of herself,” Barbieri said.

By Wednesday, the dog was following her around the house. The dog hadn’t so much as barked once — let alone gotten into a scrape with man nor beast. By Wednesday night, the dog was sleeping at the foot of Miller’s bed.

By Thursday morning, the dog had moved past following Miller and had taken to sitting in front of her — staring back at Miller. “The dog just looks right at me,” Miller said.

On Thursday afternoon, Barbieri came to give Miller her treatment, and the dog was right there, two feet away, watching the whole thing.

Miller acknowledged that over decades, she has helped almost anything with legs. “Counting a skunk and two rabbits not too long ago, this dog makes 232,” Miller said, referring to the animals she has taken in.

But Miller’s recent health struggles meant no more animals. Until now. “The dog is staying,” said Miller. “I love her. I think she loves me, too.”

Miller has already given the dog a name. Because not only is the dog doing better after three days at Miller’s home, but Miller is feeling better. Stronger. More lively.

Dazzle is incredibly talented and this trick is pretty cool. This is how Dazzle was trained to blow bubbles. (We previously showed a video of Dazzling Dazzle. Check it out if you missed it. It is incredible.)

Each dip to black is when we took a break. By “break” I mean I took her away from the dish, walked her around a little, and then came back. Just one to two minutes. I have found that doing that makes our sessions a lot more productive!

At the start of the training I did a lot of quick rewarding. That’s because if I didn’t catch just the nose dip quickly, she would start sticking her paws in the bowl. Using her paws is a behavior she tends to get stuck on a lot – thus the rapid clicking in the beginning!

At one point I saw that she got “stuck” and wouldn’t put her head any lower in the dish (beginning of the third session I think) – in case it’s hard to see, what I did was toss a cookie in the dish so she dunked her head in to eat it. I clicked when she ate the cookie and after that she understood to dunk her nose.

Also, when she first blew some bubbles I jackpotted her and then only rewarded when she blew, not just when she dunked her head.