Senator Obama is featured in book about puppy mills, A Rare Breed of Love, with this photo of him holding Baby, the three-legged poodle rescued from an abusive puppy mill operation.

That is how PE Obama describes himself. And, it is why he wants to get a rescue to be the first Presidential pet. That has inspired artist, Shepard Fairey, responsible for a poster series supporting Barack Obama’s candidacy for President in 2008. Who can forget the iconic “HOPE” portrait? It was actually just acquired by the US National Portrait Gallery, and became part of the permanent collection, the gallery hoping to have the image on display by Obama’s Inauguration Day.

The day Obama stated his interest in adopting a dog from the shelter was a slightly brighter one for the approximately 7 million adoptable dogs & cats killed each year in this country. The staggering reality is that for each one sold at a pet store or by a breeder, another perfectly worthy one is killed.

Our nations shelters are filled to capacity with all kinds of amazing adoptable animals including, as Obama put it, “Mutts like me.”

On the heels of Obama’s comment, I got a call from Pia Salk, an animal advocate who works with North America’s largest non-profit pet adoption website, Adopt-a-Pet.com. Pia simply asked if I might be willing to collaborate on a way to have my art help these animals. I’m all for adopting from the shelter! My wife and I share our home with 2 pooches, George and Weezie, who is a rescue. They are the happy canine siblings to our 2 human daughters.

I have created a limited edition run of 400 signed and numbered silk-screen prints that will be available soon at MuttsLikeMe.com. The proceeds will go to getting the furry non-partisan U.S. residents, who share our country, saved and into homes.  Shepard Fairey 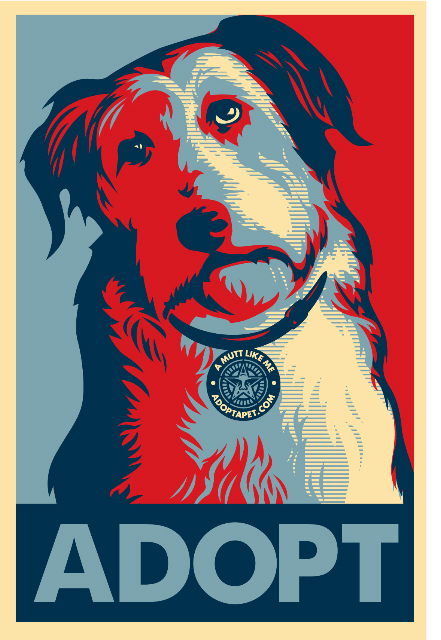 Shepard Fairey, Time Magazine named “Icon Maker” of the year, has graciously used his talents to help our shelter pets! He has made an icon out of the American mutt, proving that every mutt is truly a masterpiece. You can help spread the word on behalf of the millions of furry U.S. ‘residents’ currently waiting to be adopted! There are downloads that are downright huge (so that you can post poster-size professional images) as well as code to add to your own personal websites.

Click here to get the image and spread it around.