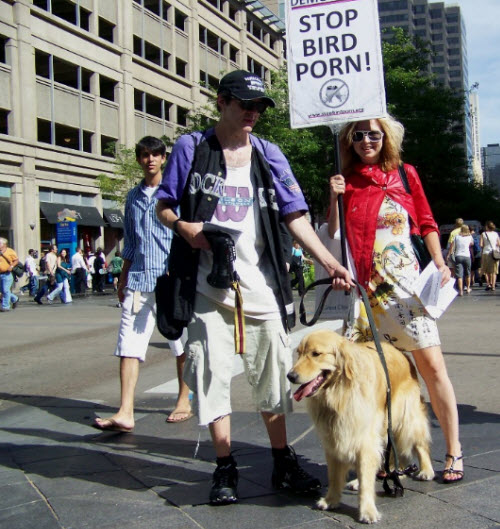 The 2008 Whag Party Convention was held in Golden, Colorado, August 25 through 28, coinciding with the Democratic Convention in nearby Denver. While Barack Obama delivered his acceptance speech in hot and smelly Mile High Stadium (renamed Invesco Field by, no doubt, rich Republicans), Cleo delivered hers in the cool mountain air at Red Rocks Amphitheater in nearby Morrison, CO. Cleo chose Red Rocks to emphasize her firmly held belief that America was a better place when everthing wasn’t named after a corporate logo. In her speech, Cleo called on John McCain to repudiate persistent rumors that, if elected, McCain will attack the national debt by selling Exxon Mobil the right to rename the United States.

While Democrats were laying out secluded “Free Speech Zones” and going over security measures for their convention in Denver, Whag Party officials unveiled a time honored, but largely forgotten, approach to dissent and security at their convention. “Anyone who had a gripe just raised their hand, and the chairdog called on them to say whatever they wished,” the officials said. “Cleo will run the country as best she knows how, but it never hurts to listen to those who may disagree with you,” said a campaign spokesman. Although several hundred thousand protesters showed up at the convention, they all changed their minds and bought Cleo 2008 bumper stickers for their cars and bicycles after they met Cleo and heard her speech.

There were no lavish parties sponsored by special interests at the Whag convention, because Cleo thinks they are silly and boring, and she doesn’t much like people who think a dog’s friendship would ever be for sale to the highest bidder. Instead, Whag Delegates gathered in a local park before Cleo’s speech, where Cleo led her supporters in singing Kumbaya, accompanied by several supporters who brought their guitars to the convention. After speech, Cleo went home and slept on her couch.

A poll taken after the convention showed Cleo still trailing Barack Obama and John McCain, but gaining ground. Cleo said that the polls didn’t bother her because, frankly, most of her supporters have better things to do than talk on the phone all day. “If you want to help the campaign,” Cleo said, “skip the polls and send an email to CNN or Fox or whoever your favorite media outlet is and suggest they go to www.goldenbarker.com.”