I just got this post from Renee Duke, Golden Retriever Rescue of Mid-Florida (GRRMF) Jacksonville Coordinator.

You had posted one of our dogs, Duke, on your web site late last year. Duke weighed 39 pounds and was severely malnourished. I fostered him and you sent him some treats. I wanted to send you an updated picture of him. You would not believe the difference. He is doing very well now.

A wonderful happy ending for Duke, who could not be cheered by that.

But, of course, Renee had another special story to share about Casey, one of the rescue’s newest intakes. Casey has megaesophogus and I am just amazed at the ingenuity of his foster mom, Char, who made him a chair so that he can eat in a vertical position. He looks so cute in his chair!

Casey has had a long and winding journey through his short life. At 7 years old, his previous owner said she no longer could take care of his medical needs. He had mast-cell cancer and “occasional stomach irritation.”

GRRMF’s mission is to help golden retrievers in need. And Casey certainly needed us! Our first order of business was to have the tumor on his leg surgically removed. The surgery was a success, and Casey is now cancer-free. One down …

Next, his foster mom Char noticed that he did, indeed, have some stomach problems. He seemed very hungry and was thin, but he’d often not be able to keep his food down after eating. An x-ray revealed a condition called “megaesophagus” – or ME for short. In layman’s terms, Casey’s esophagus is not formed properly, so instead of doing its job of transporting the food from Casey’s mouth to his stomach, it tends to back up, causing him to regurgitate. 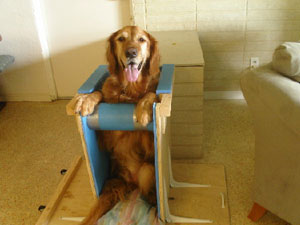 Casey waits patiently in his chair for his dinner

Luckily, Casey’s condition can be managed and there is hope that he can live out a normal life with a little bit of adjustment to his diet and after-meal behavior. Enter the “Bailey Chair.” Named after the dog it was originally invented for (who is now 10 and doing fine), the chair provides a way for dogs like Casey to eat and then remain upright until the food can pass from the esophagus into the stomach, usually about 20 minutes.

The rescue is looking for a very special home for Casey. He may need some extra attention in the feeding department, but he is in every way a loving and wonderful golden soul. And if adopted, he even comes with his own chair!

Casey naps in his chair after dinner

Read about GRRMF’s application process and download an application. If you can’t adopt right now, why not help care for Casey making a donation today? Adoption fees don’t cover all costs, and your donations are needed so we can help more Goldens like Casey.