In Chinese culture, lucky numbers are based on words that sound similar to other Chinese words. The number 8 is among those believed to have auspicious meanings because its name sounds similar to words that have positive meanings. It is thus fitting that China first hosts the Olympics and begins the opening ceremonies on 8-08-08 at 8pm.

Chad and Heather Riniker of Lisbon thought the coincidence couldn’t get any greater when their son was born at 8:08 a.m. today — 8/8/08.Then his birth weight was announced: 8 pounds, 8 ounces.

Xander (pronounced “Zander”) Jace Riniker was scheduled to be born at St. Luke’s Hospital by Caesarean section at 7:30 a.m. today, but an emergency C-section before Heather Riniker’s delivery pushed back the schedule.

“I have no idea what the odds of that would be,” Chad, a quality assurance manager at LimoLink in Marion, said of the coincidence. “I would guess slim.” The child isn’t their eighth — Heather, 31, has two children from a previous marriage and they have two together — but he is the eighth grandchild for Heather’s parents, Lesa and Ken Bulman of Fort Leonard Wood, Mo.

Check out the story in the following news video. 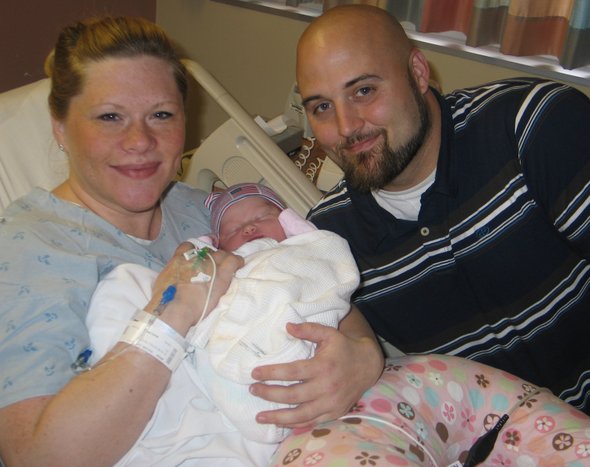 Lindsay and Joe Hauer of Fergus Falls are the parents of Hailey Jo Hauer, born at 8:08 a.m. this morning at Lake Region Hospital and weighing eight pounds, eight ounces. Photo by Lauren Radomski

Talk about a memorable birthday: A Fergus Falls family is welcoming a baby girl born at 8:08 a.m. on the eighth day of August, weighing in at eight pounds, eight ounces.

Lindsay Hauer’s cesarean section was scheduled for 8 a.m. Friday morning at Lake Region Hospital and began right on the dot. When hospital staff told her the time of her daughter’s birth, Hauer thought they were pulling her leg. “I thought they were just joking,” she said. “I didn’t believe them when they told me.” “The time was to the minute,” said Hauer’s husband, Joe.

Imagine Hauer’s surprise when, still in the operating room, she received a call from staff in the hospital’s birthing suite, where Hailey Jo Hauer was being measured and weighed.

“I had the scale on grams at first,” said Jenny Harstad, Hauer’s nurse. Based on the baby’s weight in grams, Harstad estimated Hailey would weigh-in within the eight-pound range. She later joked she’d hoped to find significance in the baby’s length as well. “I was trying to shrink her down to 18 inches,” Harstad said. Instead, Hailey measured 19.5 inches.

Back in the operating room, hospital staff resolved to buy lottery tickets later in the day. “My anesthesiologist said to me, ‘Do you realize this is once in a million? This will not happen anywhere else,’” Hauer said.