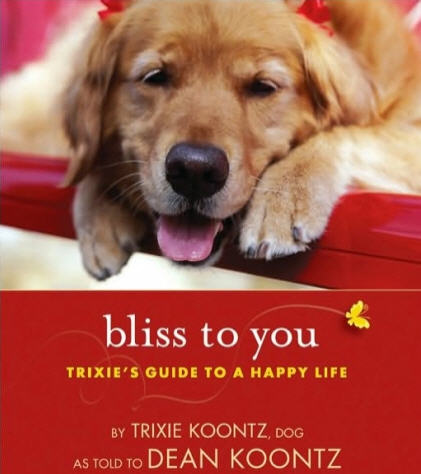 Bestselling author Dean Koontz says that his dog, Trixie, changed his life and made him a better, happier person. A 68-pound dog who lived close to the ground, Trixie certainly did cast a long shadow. She first became known outside of her own house (dog-house, that is) as a guest blogger on Dean’s website, signing off every entry Life is Good, Bliss to You. Now, in this warm and funny book–as told to Dean Koontz–Trixie once again shares her inspiring outlook on life and reveals the eight steps that anyone can take to achieve not merely happiness, but bliss.

Packed with dog wisdom, both poignant and funny, this charming and heartfelt book gives the reader much food for thought–which might not be as tasty as a bowl of kibble but is nonetheless nourishing.

This must-have book (I’m sure since I have all the other books by Trixie) will be released on September 16, 2008. But, you can CLICK HERE AND PRE-ORDER IT NOW!

You can also get this publication as a CD Audiobook. 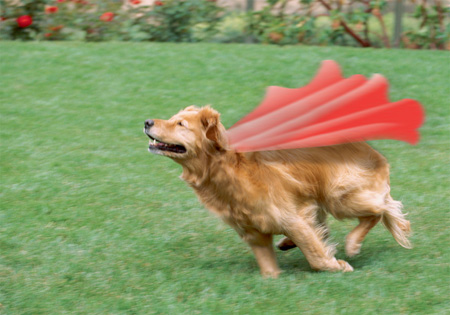 Trixie is Dean Koontz’s forever super dog, but we know there are more super dogs out there! It’s time to brag about why your dog should win Trixie’s Super Dog prize. Email trixiecontest@deankoontz.com your short story or poem in 75 words (or less) about a heroic virtue of your canine companion. Feel free to send a photo as well.

Vodpod videos no longer available.
BTW, if you’d like to affix a flag to your favorite furkids, you can do so here. It is a nifty program provided by CCI. Just click here and enjoy!

Canine Companions for Independence (CCI), an organization that since 1975 has been providing highly-trained assistance dogs for children and adults with disabilities, free of charge, is Dean Koontz’s favorite charity. The Oceanside, California, campus of CCI was years ago named the Dean and Gerda Koontz Campus. CCI has now renamed that facility the Dean, Gerda, and Trixie Koontz Campus. And, Dean’s friends at the Assistance Dog Institute, in Santa Rose, California, another worthwhile organization, will award Trixie Koontz scholarships to students in their bachelor’s and master’s programs.

You can learn more about assistance dogs at our foundation site by clicking here.