Recently, I received notice of a special summer edition of the group’s incredible newsletter. The newsletter is provided through the work of two wonderful ladies, Anne Visser and Barb Justice. This recent issue features many GRRNT rescue Goldens who have become assistance and therapy dogs. They’ve collected some wonderful heartwarming stories about these Goldens that came to rescue needing help and are now giving back to humankind. There’s Levi, Travis, Shasta, Brendon, Katy, Bo, Shasta and so many others. (On the right is adorable Therapy Golden Lady.)

You can enjoy the newsletter in its entirety by clicking here. 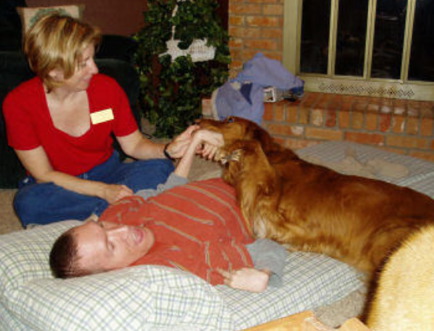 Sometimes our Goldens arrive in their forever homes with undiscovered and surprising unique talents, making the special bond between human and canine even stronger. Such is the case with Bochephus, Bo for short, adopted by the Stipe family in 2003.

Before rescue Bo belonged to a seemingly nice enough family who lived in a huge home in an affluent part of town. One would think living in a good part of town would lead to a nice happy pampered life, but that was not in the cards for Bo. This family acquired him because the children wanted a cute puppy. Unfortunately, and as so often happens, their interest in playing with a cute puppy faded quickly. Poor Bo was banished to the back yard with another senior Golden and neglected for the first two years of his life. There was no obedience training for him. He was rarely given opportunities to socialize with his family or the outside world and he was never exercised. His family fed him by taking a bag of dog kibble out to the back yard, breaking open the bag and spilling the kibble onto the ground for both dogs to eat. Bo never had the simple convenience of feeding from a dog bowl or drinking water from a clean sanitary water bowl. He satisfied his water needs by drinking swimming pool water. When the family divorced and funds were tight they released him to GRRNT. Bo may not have known it then, but his life was about to change dramatically.

As might be expected of a dog with little life experience, social interaction, or obedience skills, Bo had some issues to overcome once rescued by GRRNT. He would need extra care before he was ready to go to his forever home. Bo was afraid to walk on a leash, afraid to walk outside his back yard and afraid of the car. He was physically carried by the GRRNT intake volunteer to her SUV because of these fears. His foster family discovered he was afraid to eat out of a dog bowl, which was an unfamiliar object to him. They had to gradually and patiently work with him to acclimate him to a feeding dish, starting with a cookie sheet, moving on to a 13×9 pan, and finally to a dog bowl. Bo was also so terrified of being left alone outside he learned to scale fences. He was so afraid of being left alone inside the house he developed separation anxiety, breaking out of his crate and “freaking out”.

Bo also suffered from health issues that GRRNT addressed during his foster care. Veterinarians discovered he had an autoimmune clotting illness needing treatment before he could be neutered. Once treated and healthy, he was neutered. Fortunately Bo is healthy today.

While in foster care, the mischievous side of Bo’s personality emerged. He began to chew up his foster family’s books and magazines and hide when his fosters came home. His fosters also discovered that bottles of wine from the wine rack were mysteriously disappearing, one by one. The “thief” was caught after Bo was discovered gingerly taking the bottles, one at a time, from the rack, carrying them outside the dog doors and burying them in the back yard. Luckily, no wine bottles were broken during these episodes.

Bo was eventually moved to the home of Troy and Becca Matheny for foster care. Becca’s parents, Robert and Judy Stipe, were asked to puppy sit him during the day while his foster parents were at work. In a true fairy tale ending, it was love at first sight between Bo and the Stipe family, which also includes son Wes who suffers from Cerebral Palsy. Life for Bo and his new family was about to change in a wonderful way.

After his adoption, a behaviorist was consulted to develop a plan of action to desensitize him to being left alone. Today he is comfortable staying alone for short periods of time.

Bo and Wes formed an immediate strong bond that can only be described as magical. Bo became a special guardian and watchful protector of Wes. Although Bo has no special training as a service or assistance dog, he began to take on this role with Wes. He has the uncanny ability to sense what Wes needs and is there to offer his help. At the very first physical therapy session that occurred in the home after his adoption, Bo, without any prompting, automatically helped Wes to steady on the ball by leaning on the side he was sliding towards to help him balance. Everyone, including the physical therapist, is astonished at Bo’s special talent. Additionally he encourages Wes to maintain good head control. He also keeps a smile on Wes’ face during his grueling therapy sessions. When Wes has a coughing episode (a side effect of Cerebral Palsy) Bo will run into other rooms in the home to alert a family member that Wes may need assistance. Everyone who knows Bo today is in awe at what a WONDERFUL dog he is and what a truly special bond Wes and he share.

The Stipe family keeps a wine rack in the home at Bo’s level. He no longer feels the need to bury the bottles in the backyard now that he has found his true calling as a guardian and protector of his beloved Wes.

Don’t forget, check out the entire issue by clicking here.