We learned about this story from author, Greg Mitchell, who has been pursuing stories about non-combat American deaths in Iraq. Greg is the esteemed editor of Editor & Publisher, the journal of the newspaper business which has won several major awards for its coverage of Iraq and the media. He has written eight books, his latest just published today: So Wrong for So Long: How the Press, the Pundits — and the President — Failed on Iraq.

It is often said that a free press is the watchdog of democracy, insuring that the conduct of our leaders is examined with a critical eye. This makes Greg Mitchell the watchdog of watchdogs, his weekly column “Pressing Issues” over the past five years intensely scrutinizing the coverage of the Iraq war, the media’s views of the credibility of the Bush Administration, and such related topics as 9/11, the war in Afghanistan, and the CIA Leak Case.

Actually, back in 2003, Mitchell was one of the few mainstream journalists to question the grounds for war, this book providing a unique history of the conflict from the hyped WMD stories to the “surge.” It is a must-have book for anyone concerned with how we got into Iraq and why we can’t seem to get out.

This photo shows Neesley on a visit to his nephew’s 4th grade class in Grosse Pointe Farms, the school’s newsletter, describing it this way: “Sergeant Peter Neesley, uncle of Patrick D., visited Richard Elementary while home on leave from Iraq. Sgt. Neesley led the school in the Pledge of Allegiance and visited several classrooms answering questions from our inquisitive students. Thanks for spending valuable time with us Sgt. Neesley and don’t forget to write and keep in touch. Thanks to all the men and women in the armed forces. We are so proud of you!”

According to Greg, this is how the discovery began.

Peter Neesley died in his sleep on Christmas Day in Iraq last December — but the dogs he rescued there live on, miraculously, back at his home in the USA. I’m proud to say that I had at least a tiny something to do with it. I wrote about Sgt. Neesley’s passing right after Christmas, both at Editor & Publisher (which I edit) and on my blog, when few knew about it. I also printed a photo of him taken recently with a group of kids at his old elementary school. The outpouring of response I received from friends (near his Michigan home and scattered) and family was incredible. Through their postings, many were able to get in touch with each other. He was clearly quite a young man, someone who hailed from a very well-off area who had a lot of other choices in life — but joined the military.

But the story didn’t end there. It turned out that all of these people, and more, soon learned, from my writings or elsewhere, that Peter, 28, had saved and cared for a couple of dogs over in Iraq, and they were now in peril. So his family and friends, with the help of media and local groups, launched a campaign to rescue them, again, and bring them to the U.S.

An AP story revealed: “In e-mails and phone calls from Iraq, Neesley talked about how he came across Mama, a black Labrador mix, and Boris, her white and brown spotted puppy, while on patrol in their Baghdad neighborhood. One of Mama’s puppies was later killed by a car, so Neesley and his friends built a doghouse to shelter the animals. Photographs show Neesley feeding the dogs and kneeling next to the red-and-white doghouse and Boris walking along the cracked sidewalks of Baghdad.”

After he died, “Still grieving, the family decided that they would honor Neesley’s wishes and try to bring the dogs home to Michigan. ‘To have something that they can hold and touch and care for that Peter cared about, that’s the whole thing,” said Julie Dean, his aunt.”

After four weeks of work, and the help of the Iraqi Society for Animals, the dogs recently arrived in the U.S.

Carey Neesley said her brother decided to re-enlist in the Army in 2005 after learning that one of his friends was killed in Iraq, leaving behind a wife and two children. Protecting others was part of his life, she said. “He didn’t want another young man who had a wife and kids at home to die,” she said. “He’s always had such a strong sense of family and protecting those who can’t protect themselves. Caring for a mother and her stray puppy, why would you ever think to do anything else?”

My own small role concluded when the well-known Banfield Pet Hospital office in Portland, Ore., contacted me saying they wanted to offer free lifetime care to the two dogs, at one of their local hospitals in Michigan, and asking me to put them in touch with the family. I contacted Julie Dean — and last week the offer was accepted and announced. Peter, at least, would be happy about this. 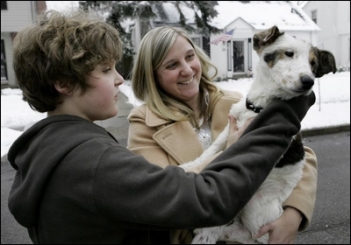 You can also hear a 4 minute NPR “All Things Considered” Feb 19th report with Sgt. Peter Neesley’s sister, Carey. In this AP photo by Paul Sancya, Patrick Neesley is petting Boris as his mom, Carey, holds him after arriving in Grosse Pointe Farms, MI, from Iraq. She has indicated that the dogs are slowly adjusting to their new environment.

Neesley says both Mama and Boris are “very sweet and very mild-mannered dogs,” but Mama is used to having to protect her pup, as well as her food and territory. “So we’re just kind of trying to ease her into the fact that she’s safe and sound here, and nobody’s going to hurt them,” Neesley says.

The dogs also have to adjust to the Michigan winter. “They’re not used to the cold and especially not the snow,” Neesley says. “I have to carry the puppy out in the snow; he will not go. He goes to the bathroom right away and wants right back in the house.

“I think they’ll adjust. You know, right now, their coats are very thin because of the weather in Baghdad. And I think, you know, [once] their coats get a little bit warmer and they get used to it, they’ll be OK, but I think right now it’s a shock.”

Neesley says the family is thankful for all the help they got with the dogs. “They’re tremendous dogs, and we are so fortunate to have them and so grateful to everyone who played a part, down to the soldiers who were caring for them on the base, you know, making sure they were safe and fed until we could get them,” she says.

The family still keeps in contact with those soldiers, Neesley says. “There are two in particular … who were very concerned about the dogs’ welfare, and were very close to Peter, and we exchange e-mails,” she says. “I think part of what we’ve learned from all of this is that there are so many good, kind people in this world. There really are.”

One thought on “Grieving family fetches son’s dogs from Iraq”