Cut the Cheese and Blame the Other Guy – The Stench of Washington Politics
By Phil Harris, Townhall.com

Pompous political windbags have a distinct odor, speaking of which, reminds me of a story that you have likely heard from Uncle Dan or Grandpa Gus. There are families that avoid bathroom humor at all costs; however, if you sprouted from one of those, it is unlikely that you are reading a column that has “cut the cheese” in its title. If you have never heard, “cut the cheese” used to describe something that does not compliment the bouquet of a fine wine; then brace yourself. You are about to be utterly violated.

A minister was on his way home from the church picnic. He had gorged himself on Martha Bergstrom’s pork-n-bean casserole. For some reason, he could not get enough of it, and old Martha Bergstrom could not have been more delighted.

While turning the corner at Laramie Avenue, his car began to sputter, and he realized instantly that he had forgotten to stop at the filling station. He pulled over in front of a little white house. Spring flowers were growing everywhere, and a perfectly manicured lawn set the entire scene ablaze with color.

He rang the doorbell, and asked the woman who answered if he could use her telephone. She recognized the minister and graciously invited him in. He called his son, and arranged for him to bring a can of gas. The woman invited him to sit in the living room while he waited.

As he took a seat, she reappeared, rolling an old man in a wheelchair. She parked him across the room and excused herself as the old man fixed a suspicious gaze on the intruder. A beautiful golden retriever trotted into the room, sniffed him a bit, and then sat down next to the minister’s chair.

He was about to compliment the old man on his wonderful landscape, when suddenly he felt an urgent rumbling. Obviously, Martha Bergstrom’s pork-n-been casserole was at work, and it came on with such a ferocity that a bit of gas slipped out before he could gain control.

There was no sound, but a foul odor was soon evident. The old man in the wheelchair looked at the dog and sternly said, “Sammy.” 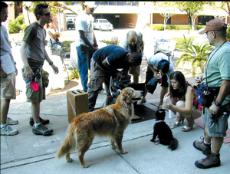 The Florida State University College of Motion Picture, Television and Recording Arts, also known as The Film School, recently received third place honors at the 28th annual College Television Awards in Hollywood, Calif. for the drama “Abe,” an eight-minute film based on the life of a dog after his owners die and he must find a new home.

“This was my first major film award, and it feels great,” said Erika J. Harvey, the film’s producer and an FSU graduate student, in a press release. “The FSU Film School taught us how to put together amazing productions under an acute timeline and work effectively as a team. From pre-production to post-production, it’s all very professional.”

According to a release, as a “D3” assignment, the film had to be shot in three days. Areas around Tallahassee in which the film was shot on its $2,000 budget included Galley Alley in downtown, the Florida A&M University campus, the Leon County Animal Shelter and nearby Monticello.

“It’s a great surprise (to win the award),” said Khen Shalem, the film’s director and an FSU graduate student. “We were very, very happy. It’s a simple film that we shot in three days. For a bigger film, we sometimes expect great awards, but not for smaller ones.”

Thought it also featured human actors, the film’s main star was a Golden Retriever named Ammo, owned by Destiny and Gil Marshall, which the filmmakers found with the help of the Humane Society. Shalem spoke on the challenges associated with directing a dog.

“It’s a very different kind of thing to work with a dog as an actor,” said Shalem. “We still wanted to be able show drama and emotion, and that was difficult with a non-speaking actor.”

Shalem, however, also mentioned that the film would not have been the same without Ammo or his owners and trainers, the Marshalls. “They took three days off work to come on set (and help),” said Shalem. “We couldn’t have done it with a different dog or different trainers. We owe them a lot.”