What a cool program for this university to have. I am so very impressed! 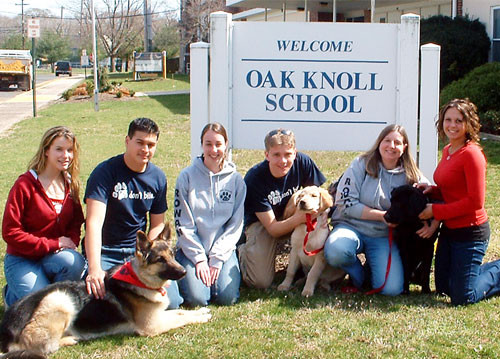 Rowan student teachers Ashley Ryan and LeighAnn Quinn invited R.U.F.F. (Rowan University Forward to Freedom) to visit their fourth grade students at Oak Knoll School as part of a “Character Education” class and because they were learning about Helen Keller during Women’s History month.This is the Rowan division of puppy raisers. After their time spent at Rowan, the dogs then go on to Morristown for formal training to become guide or service dogs.

Wisdom says it takes a village to raise a child, but Kari Mastromonica, a 2004 graduate of Toms River High School East, is finding it takes roommates, teachers, family and an entire university campus to raise a Seeing Eye puppy.“The campus is the perfect place to raise a guide dog as we are a city unto ourselves,” says Robin Brelsford, co-leader of Rowan University’s Forward to Freedom (RUFF) puppy-raising program. “The dogs get plenty of exposure to the things they will encounter as guide dogs. Our dogs grow up in crowds, around traffic, construction equipment, bicycles, wheelchairs, fire alarms, you name it.”

This year RUFF is raising seven puppies, socializing them before they return to The Seeing Eye, Morristown, for formal training. Mastromonica, a junior psychology major, is raising Walden, a Labrador/golden retriever cross puppy.

“I always saw the puppies around campus my freshman year, and I was intrigued by them,” says Mastromonica. “So, I decided to get involved. I filled out an application, and in my sophomore year I started raising a German shepherd named Al, who is continuing training with The Seeing Eye.”

Mastromonica, like all of the other student puppy-raisers, lives on campus. That means Walden has three roommates in addition to Mastromonica. Lindsay Jackson, from Sea Isle City; Kathy Sullivan, from Cateret; and Danielle Cascella, from Spotswood, share their apartment with Walden. All four roommates have agreed to take care of Walden for the duration of his stay.

“We get these puppies at just seven weeks of age. All housetraining and basic obedience are on us,” says Brelsford, who is raising Jeeves, a Labrador/golden retriever cross, with her husband George Brelsford, Rowan vice president of student affairs and co-leader of RUFF.

According to Mastromonica, the experiences and situations have been interesting and not always easy when it comes to taking Walden everywhere she goes. “Outside of campus, sometimes people don’t want Walden in their stores or other buildings,” says Mastromonica. “But at Rowan, everyone is so supportive. People are always stopping me and asking me questions because they are curious. I am always willing to stop and educate people about the reason why I am raising Walden.”

According to Robin Brelsford, all of the stares, awkward situations and training are worth it.

“Raising a puppy requires a deep understanding that this commitment goes way beyond yourself. It is extremely difficult to love and nurture a puppy for a year to give him/her to someone else,” she says. “As much as I love and want my puppy, I don’t need my puppy. Someone else’s life will be greatly enhanced and protected by the job this puppy will be able to do. That’s why we do what we do.”

I cannot imagine that all that follows from this story happened to one family. It seems unimaginable.

Homeowner Rob Kiziuk of Pine Bush, left, with Ken Scribner Sr. and his 15-year-old son, Ken Jr., who broke down the door of the house to save Kiziuk’s animals, Snowflake, a golden retriever, and the family’s cat and rabbit. Photo by Times Herald-Record/MICHELE HASKELL

Help rises out of the ashes: Family loses home but rescuers save pets, memorabilia
By Steve Israel, Times Herald-Record

Pine Bush — How can you find a ray of light when you’ve lost your home to a fire and your cars to a flood? Rob and Diana Kiziuk couldn’t imagine any when their trials began two weeks ago, on April 13.

Diana, an asthmatic, struggled to breathe. A reaction to perfume sent her to Hackensack Medical Center, the New Jersey hospital where she’s a nurse. She needed oxygen to stay alive. After three nights — during the worst flooding Jersey suffered in decades — she headed to the basement apartment she and her husband, a mechanic in Jersey, rented in Teaneck. She gasped when she saw it.

Thick sewage flooded the living room. When she opened the door of her white 2001 BMW X5 in the driveway, muddy water poured out. The SUV was destroyed. So was an old Ford Explorer next to it.

Still, she and Rob had their beloved home next to a horse farm on Gillespie Street in Pine Bush. More importantly, they had their kids, ages 5, 7 and 14 months, and their pets, golden retriever Snowflake, cat Bobito and rabbit Daisy.

Then, last Monday, 10 days after Diana was hospitalized and a week after the floods, they were working in Jersey when they got calls from a Pine Bush neighbor — one of the few they knew in their two years commuting from northern Orange County:

“Your house is on fire.”