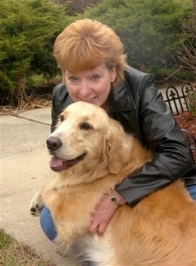 We’ve done a few stories on Golden Retriever Toby who everyone all across the world was talking about. He had saved his owner’s life ( if you are unfamiliar with this amazing but somewhat questioned story, just go here and here and here) by dislodging a piece of apple that had gotten stuck in her throat.

Well, Toby made it to the big stage last night, appearing on the Dave Letterman Show. But, it was his housemate canine Fred who stole the show.

The reporter that initially broke the story in a small paper from Cecil County, Maryland was along once again for the ride, getting the scoop in New York City. That must have been fun for him to tag along for all the fun.
Toby takes Manhattan
*Pooch who saved life of apple-choking owner tackles the Big Apple, Letterman
By Scott Goss, Cecil Whig 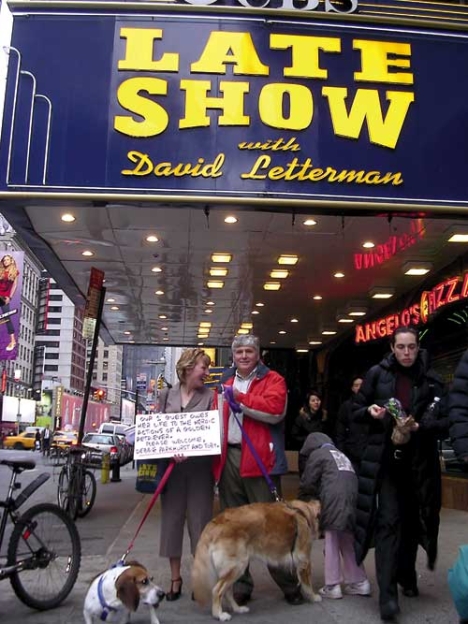 Calvert resident Debbie Parkhurst holds the cue card used for her appearance on the “Late Show with David Letterman” underneath the marquee of the Ed Sullivan Theater in New York on Wednesday. Joining Parkhurst were her husband, Kevin, and her two dogs, Fred and Toby. Cecil Whig photo by Scott Goss.

NEW YORK – Toby the Heimlich dog cemented his status as Cecil County’s most celebrated hero — or at least its most infamous canine — with an appearance Wednesday on the “Late Show with David Letterman.”

“It gives a whole new perspective on man and his best friend,” Letterman told his audience after explaining how Toby saved his owner from choking on an apple by jumping up and down on her chest. “All my dog does is take a dump on the rug,” he said.