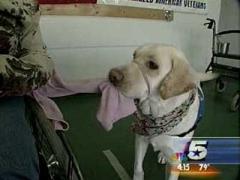 ROCKWALL, Texas — Many dogs know how to roll over, get the paper or play fetch, but some disabled veterans are learning that pups are a lot more than man’s best friend.

In a Rockwall training center, there are no limitations. Kristen Daniels has been in a wheelchair most of her life. Her best friend Luke helped her almost forget she has a disability.

Click here to learn more and watch the cool video . . .

The dog with a Canaries season ticket
Archant Regional

He’s the only four-legged football fan who has a season ticket to Carrow Road and not surprisingly, he has a bit of a fascination with Splat the Cat.

Elliot is a golden retriever cross Labrador guide dog who has given his visually-impaired owner Marcus Rawlings the freedom to follow Norwich City at home. It’s a devotion which means a journey of many miles for the pair, as Mr Rawlings, a father-of-two, lives in Peterborough.

He said: “Elliot gets very excited when Saturday comes and he sees me put on my Canaries’ scarf. Going to the match with him means taking a water bowl, blanket, chews and a bit of food as a ‘well done’ for behaving well, which he usually does. He does doze off a bit at my feet, but there’s usually enough room for him to sit up and look over the shoulders of the people in front and he seems genuinely interested in watching the movement.

“He’s especially riveted by Splat the Cat. Elliot doesn’t even bark, because he was schooled not to, but I think seeing Splat is one occasion when he might be tempted if he weren’t so well trained.”

Before he lost his sight, Mr Rawlings, 34, was a fair-weather Norwich City fan, attending the occasional game. Then in 2003, he went to bed one night with a headache and woke up two weeks later in hospital. He had suffered a brain haemorrhage and doctors said he was lucky to be alive.

FALLBROOK — A donation from a Fallbrook woman could mean a breath of fresh air for animals rescued from burning buildings. Debbie Ipsen and her husband, Bill, have donated 10 sets of pet oxygen masks to the North County Fire Protection District.

The Ipsens, accompanied by their Golden Retriever, Abby, presented the gift Monday to fire protection district spokesman John Buchanan and his dog, Wylie, a Norwegian Elkhound.

Ipsen said she got the idea for the donation after reading a newspaper article about the oxygen masks being used at other fire departments throughout the United States, including a small fire department in Clarendon, Vermont. “I decided this was something I had to do,” Ipsen said. “We’re animal lovers and wanted to make sure the animals are taken care of.”