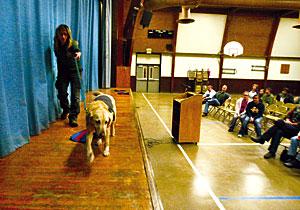 The company contracted by Lodi Unified School District to sniff campuses for drugs, alcohol, weapons and gunpowder presented a demonstration and question-and-answer session at Lodi Middle School on Wednesday evening.

On the stage of the multipurpose room, Figueria led KC down a row of backpacks and purses. KC sniffed one, then hunted for her toy. She moved to the next one, and sat. She circled a second backpack and sat again.

The dogs don’t actually know what alcohol, drugs or weapons are, Figueria said. Instead, they are continually hunting for their toy, a four-inch length of firehose stuffed with thick cotton batting.

She tossed the piece, or pretended to, and unzipped the bags to show what KC found: a miniature bottle of Jack Daniels, two shotgun shells. The crowd applauded.

K.I.D.S. dog handlers will soon conduct visits at each middle and high school campus until the end of the school year.

The canine program is the first here in at least 10 years. LUSD’s school board adopted a policy allowing drug-sniffing dogs in 1998. K.I.D.S. operates similar programs in school districts throughout California and its trainers have 50 years combined police and canine training and drug enforcement experience. The dogs are all Labrador or golden retrievers and are trained to simply sit down if they detect odors. They are not trained to detect odors from over-the-counter medications or tobacco.

Matt and Figueria stressed the program is not a “gotcha,” and not meant to get kids in trouble. They want to keep schools safe, and deter students from using drugs and alcohol and from bringing illegal items to school.