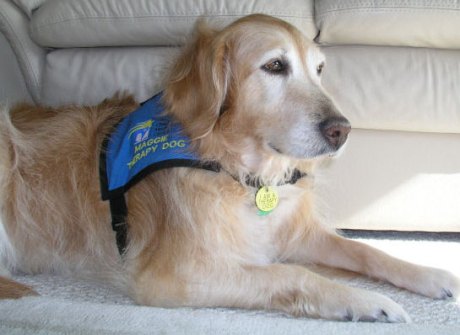 Maggie’s story has already been detailed here and here and here.So, if you do not know about this unbelievable story, go and get the background.

Hi Rochelle, I have some awesome news to share with you. Maggie’s tumor in her nose seems to be gone after her exam at Tuft’s the other day. She is truly an ANGEL with four legs. I sent you a few pictures of the girls to enjoy. Maggie has been taking two all natural supplements and a multi vitamin since mid October and I changed her diet to somewhat of a holistic type. Maybe its just being lucky but I have to say having positive energy does help. — Mike

UPDATE: Here is a photo slide show of Maggie!

Since I know we all live for the photos in order to bring these stories alive, I always try to please. The following photos are of Maggie and her puppy sister Sadie, who is currently in training to follow in her big sister’s pawprints. 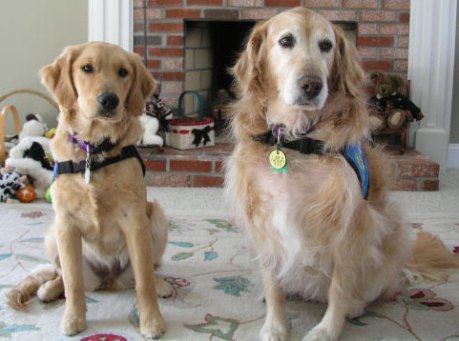 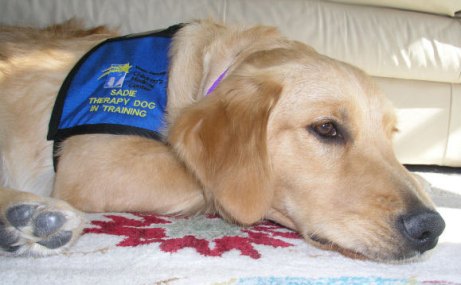 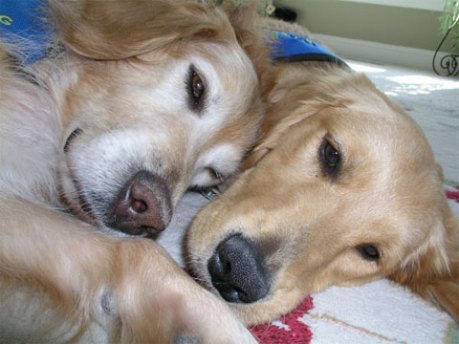 Maggie, a golden retriever, worked as a therapy dog visiting children at University of Massachusetts Memorial Medical Center until she was diagnosed last fall with cancer. To remove it would have meant removing nearly her entire snout.The news devastated her owner, hospital staff, and the hospitalized children who had come to expect her weekly visits. It particularly affected a 13-year-old boy named Jay Davis.

Jay also had an inoperable tumor, in his chest. He has been living in the Worcester hospital’s pediatric intensive care unit since August.

Both boy and dog have been undergoing chemotherapy and receiving steroids to help fight the growth of cancerous cells. And despite many highs and lows, both now appear to be doing better.

Maggie’s veterinarian, Meredith Gauthier , says the dog’s tumor — nearly the size of a golf ball last fall — “appears pretty much gone.” Gauthier, an oncology resident at the Tufts Cummings School of Veterinary Medicine, said she has not biopsied the area because the procedure is pointless. If the tumor did not respond to the chemotherapy, Maggie’s future would have been bleak.

The chemotherapy itself took a toll. Maggie underwent the treatment for three weeks. She had to be carried outside to relieve herself. Veterinarians said additional radiation treatment was not an option because the chemo had already weakened her so much.

Michael Kewley, Maggie’s owner, gave her nutritional supplements and vitamins to help her along. Kewley, who runs a therapy pet service, Shrewsbury Paws for Patients, has adopted a golden retriever puppy named Sadie and hopes to train her to follow in Maggie’s footsteps as a comfort to hospital patients and the elderly.

Her recovery has stunned Kewley, who has returned to the hospital with Maggie for visits.

Meanwhile, Jay has been in the intensive care unit for more than seven months. Intense chemotherapy treatment in December left him unable to muster enough strength to open his eyes.